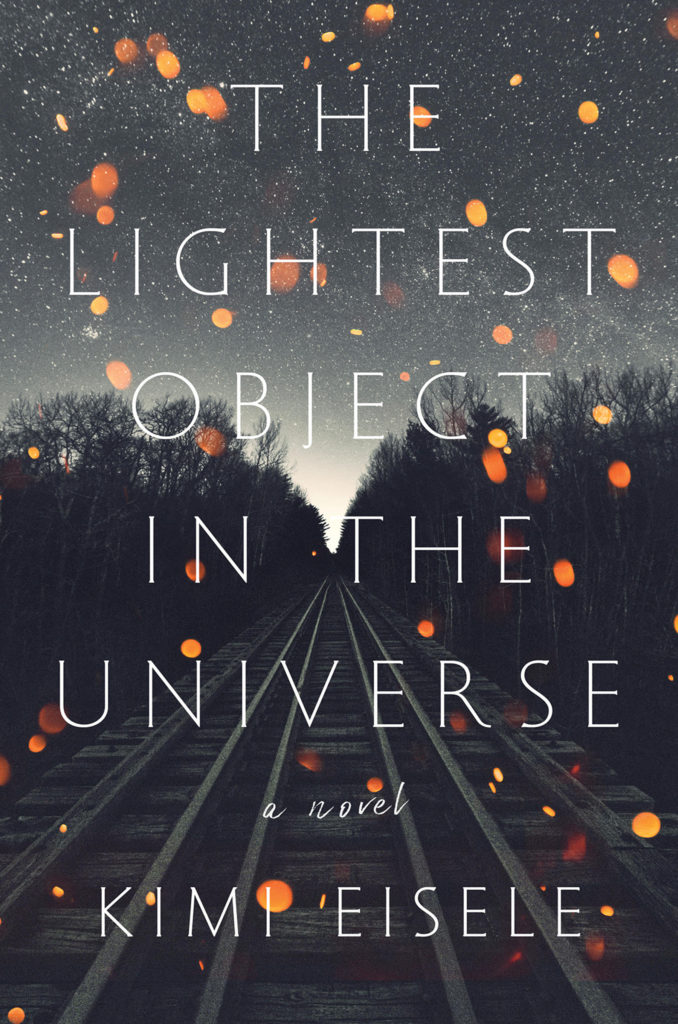 After a global economic collapse and failure of the electrical grid, amid escalating chaos, Carson, a high school teacher of history who sees history bearing out its lessons all around him, heads west on foot toward Beatrix, a woman he met and fell hard for during a chance visit to his school. Working his way along a cross-country railroad line, he encounters lost souls, clever opportunists, and those who believe they’ll be delivered from hardship if they can find their way to the evangelical preacher Jonathan Blue, who is broadcasting on all the airwaves countrywide. Meanwhile, on the other side of the country, Beatrix and her neighbors turn to one another for food, water, and solace, and begin to construct the kind of cooperative community that suggests the end could, in fact, be a promising beginning.

But between Beatrix and Carson lie 3,000 miles. With no internet or phone or postal service, can they find their way back to each other, and what will be left of their world when they do? The answers may lie with fifteen-year-old Rosie Santos, who travels reluctantly with her grandmother to Jonathan Blue, finding her voice and making choices that could ultimately decide the fate of the cross-country lovers.

The Lightest Object in the Universe is a story about reliance and adaptation, a testament to the power of community and a chronicle of moving on after catastrophic loss, illustrating that even in the worst of times, our best traits, borne of necessity, can begin to emerge.

“A tale told in sentences starkly declarative of the gone world they describe, The Lightest Object in the Universe offers characters that linger long after the final page is turned. This is a novel with that exact balance of heart and momentum. Dazzling.”
—Christian Kiefer, author of The Animals

“It might be an oxymoron to call an apocalyptic novel hopeful, but The Lightest Object in the Universe is a testament to the power of love in the darkest times. Like a near-future Cold Mountain, it’s the story of a man’s epic journey to reunite with the woman he loves, and a woman’s determination to reimagine and rebuild after the fall. There’s horror, yes, but more moments of ingenuity, generosity, and grace. I couldn’t put it down.”
—Sheri Holman, author of Witches on the Road Tonight

“Kimi Eisele’s first novel is a love story set in a landscape where everything (government, history, infrastructure) has collapsed—except our need for one another and the struggle to persevere. In such a world, love may be on the run, but it can still  be a transforming force. What’s required is a kind of faith: in ourselves, in one another, in a future that is no more or less uncertain than it has always been. The experience of humanity, in other words, which Eisele brings to every page of this deeply moving narrative.”
—David L. Ulin, author of Sidewalking: Coming to Terms with Los Angeles

“Post-apocalyptic stories are all the rage, but Kimi Eisele’s novel is a rarity. Her people don’t merely wander across a blighted wasteland; they form communities, till the soil, send their voices into the ether, and cling tenaciously to hope. The Lightest Object in the Universe is a triumphant story for anyone with a shred of faith left in the human spirit.”
—David McGlynn, author of One Day You’ll Thank Me

“A near-future apocalypse forms the backdrop for an intense, moving romance in Eisele’s smart debut . . . Fans of Station Eleven will particularly enjoy this hopeful vision of a postapocalyptic world where there is danger, but also the possibility for ideas to spread, community to blossom, and people to not just survive, but thrive.”
—Publishers Weekly

“This is Charles Frazier’s Cold Mountain crossed with Emily St. John Mandel’s Station Eleven. Filled with luminous writing and messages of love and hope, this story will motivate everyone to sharpen their ham radio skills.”
—Library Journal

“A compellingly realistic depiction of the world after the collapse of civilization, although at its heart, it is a love story told in the vein of Cold Mountain . . . The Lightest Object in the Universe is an intriguing and engrossing debut novel that will leave readers thinking about their own ability to survive, their own capacity for love, and their willingness to face catastrophe with hope.”
—New York Journal of Books

“A worthy addition to the realm of speculative fiction . . . More than just standard techno-challenged-humanity-rendered-atavistic fare, this is a love story. More accurately, the quest for love and its potential in a world demanding to be rebuilt.”
—The Millions

Read an essay about why I wrote the book.

Listen to interview with me on WOWD, Takoma Radio, 94.3 in Takoma Park, MD. It aired on Sunday, Sept. 8, 2019. Produced by Eve Austin. Special bonus track from Tradiciones singing “La cosa más ligera,” the corrido from THE LIGHTEST OBJECT IN THE UNIVERSE.

Two characters in THE LIGHTEST OBJECT IN THE UNIVERSE write and sing a corrido about their journey to the Center. A corrido is a Mexican ballad that narrates an event in time & place. I asked my friend Jesús Garcia to put the song to music, which he did for the launch party of the novel. Here he is with his band, Tradiciones. Filmed on July 9, 2019 at Exo Bar in Tucson.

“Instead of focusing on what is dark and terrifying like most dystopian novels, love lights the way in The Lightest Object in the Universe. Following a cataclysmic event, Beatrix is working with her neighbors to rebuild their community, while former school principal Carson travels across the country on foot to reach the woman he knows is his soul mate. Their individual stories are trying yet hopeful and celebrate the best parts of humanity. Highly recommended for book clubs and fans of dystopian literature.”

“What a pleasure to read a hopeful post-apocalyptic novel that demonstrates that love still matters and that new communities can form by taking the best of the knowledge that we have collected and putting it together to start to rebuild society in a thoughtful way. With both head and heart, The Lightest Object in the Universe, is a story that will stick with you.”

“The Lightest Object in the Universe is a hopeful, heartbreaking post-apocalyptic novel set in a world where half the population has been killed by a widespread flu and electricity and running water are a thing of the past. Mini societies and gangs have formed in this new America, and in the center of the country, the leader of a large, mysterious cult takes to the radio to call his followers to join him. Amid the chaos, two lovers separated by the continent try to find each other and make a new life in the darkness. This was a great novel about building community from nothing, fighting the odds for people you love, and the power of storytelling to overcome the darkness. It’s a perfect book for fans of Station Eleven and anyone who finds the idea of uplifting post-apocalyptic novels a fascinating concept.”

“Kimi Eisele has crafted a ‘post’ apocalyptic novel without the post. The Lightest Object in the Universe reads scarily like a current affairs masterpiece that will make you lose sleep with a stark reality of what may come in a few short years. Yet love abides in this yarn not to miss. A masterful debut.”

-Andy Nettell, Back of Beyond Books, Moab, UT

“Nice debut fiction. I loved the near future setting of regular folk trying to cope. It made me take a look at my own life to re-evaluate how lightly I’m living on this world and how I can do better. I hope the author plans a follow-up, I’d love to know how her characters fare as they start to run out of more pre-apocalypse products.”

“Its a love story, but not in the way you’re thinking. The Lightest Object in the Universe is a love story between despair and hope, darkness and light, the end of all things and the beginning of all things. It is uplifting and inspiring, cautionary and frustrated, a true exploration of duality and a shining beacon in a dark world.”

“The Lightest Object in the Universe keeps getting better and better with every page. It’s got that Station Eleven vibe, but I kept thinking of Stephen King’s The Stand. I don’t know if it’s my romantic’s heart dying to know whether Beatrix and Carson find each other, or the plot, or just how many layers got added as it went on, but once I started reading it I couldn’t put it down.”

Alone now, Carson stood at railroad tracks, which reached west into an apparent infinity … He looped his wrists through the straps of his pack and lifted it a few feet off the ground, testing its weight. Easily sixty pounds. He’d been an avid backpacker in this twenties … back when he’d believed in John Muir’s adage that the hope of the world lay in wilderness. Maybe it still did. He hoisted the pack onto his back and stepped onto the tracks.