Re:Configurations was an evening-length performance focusing on issues of lesbian, gay, bisexual, and transgender identity and partnership that premiered in Tucson, Nov. 2006.  I co-directed the show with Jennifer Hoefle. The performance featured the participation of ten LGBT community members between the ages of 18 and 68, recruited with the help of Wingspan, Tucson’s LGBT resource center.

Hoefle and I facilitated eight weekend workshops during which participants developed movement and writing material that was used to shape the performance. Community sections wove together seven dances by Tucson choreographers from who created new work or “reconfigured” existing repertory as same sex duets.

The project was, in part, a response to Proposition 107, the November 2006 ballot initiative seeking an Arizona state constitutional amendment limiting benefits of domestic partners. (Prop 107 failed the week after the show premiered. Two years later, in 2008, Arizonans voted to amend the state constitution to define marriage as between one man and one woman.) 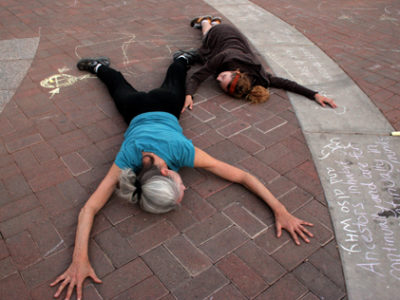 Next Project (n) The Invisible City